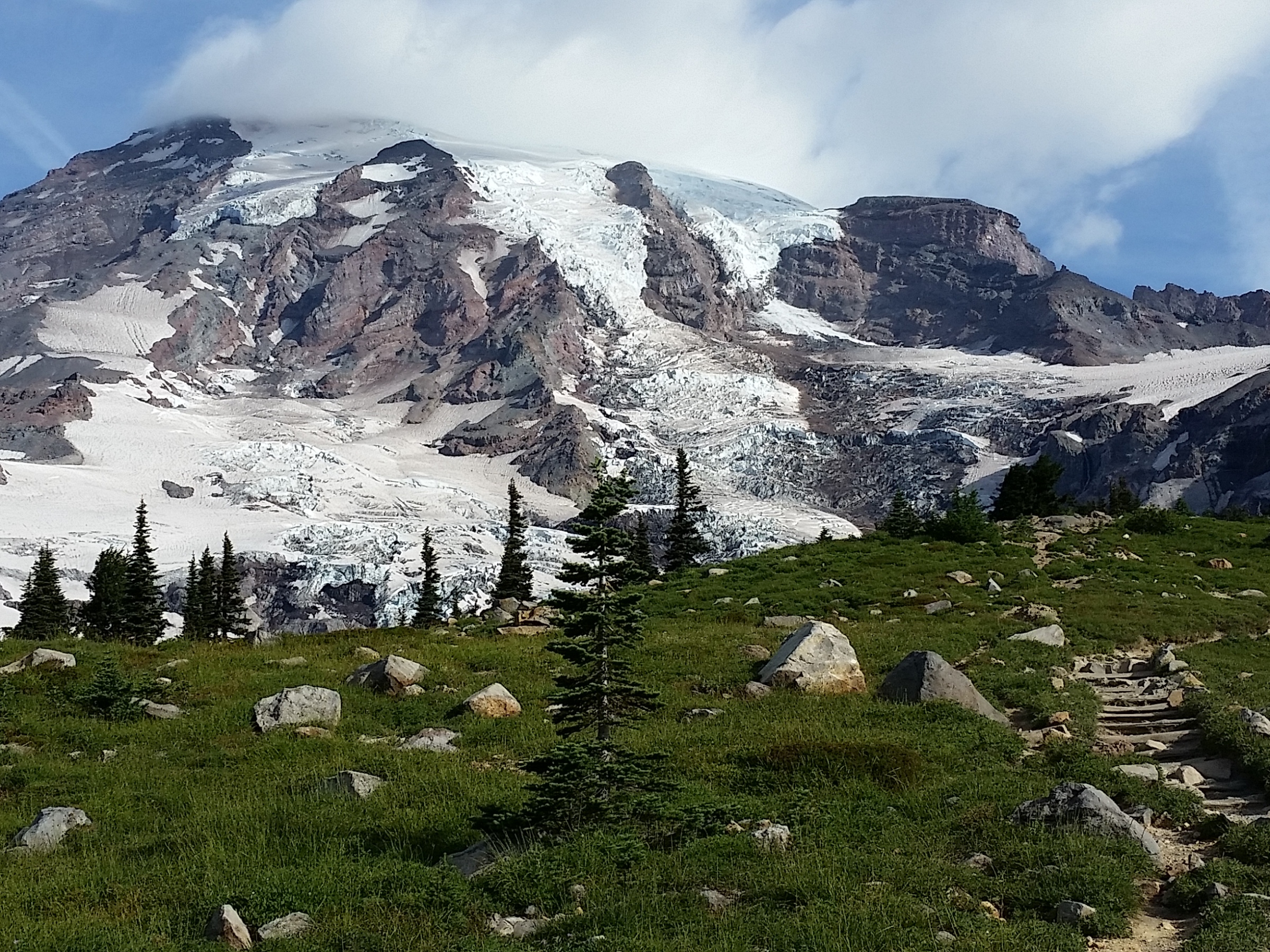 1:30p I have just been on the most glorious hike of my life. I could have taken a thousand pictures as at every bend, at every elevation, it just seemed more and more beautiful. And it was a divine mistake. One that I am most grateful for.

I had intended to hike Paradise Glacier, which I have read used to be home to ice caves, before general climate changes altered those formations. What fascinated me and drew me to the hike was twofold. One, to actually hike ON a glacier! And two, the legitimate use of cairns to mark the way, as the trail is ungroomed beyond a certain point.

The trail begins at one of the most popular hikes in the park, which normally would have deterred me. But for this hike, you proceed up the mountain in the opposite direction, using only the east side of the loop before branching off on a steeper, more solitary path. I was okay with that.

I was following the guide book as best I could, but the proper direction was not as clear as they made it out to be. “Find the trailhead to Skyline and proceed to the right” (instead of left). That is what I did, but it turns out I had accessed the trail further west of the actual start point, having walked up from the lower parking lot and not through the Visitor Center. The path to the right took me up Alta Vista (something like that), which simply re-joined Skyline a bit further north. I wanted to be disappointed, but I simply couldn’t be.

As I was determining which way to go, I vacillated and tried to figure it out. I felt it was wrong, until I came upon the deer! First I saw three bucks on the left, grazing peacefully. I took a few photos, and they did not seem at all disturbed by my presence. As I approached more closely, I saw a doe and her fawn on the right! I was able to get only a snap or two off before they both made their exit. Doe are very protective of their fawn.

What made this so significant is that I have been disappointed to miss seeing deer on this outing, as I have a feeling we have a developing kinship, perhaps my new spirit animal. Night before last, as I lie away in the early hours before dawn, I asked God (the Universe) why I had not seen deer. I was looking through my tent roof and up at the night sky, though all was blurry as I didn’t have my glasses on.

As I lied there – look! a deer! not one but two! Wow, there they are. Just as I smiled at this – look! three more! It’s a family! And yet another small cluster of deep appeared, just before I roused and realized I had been only dreaming. But I thanked the Universe anyway, feeling I was being affirmed and appeased.

Now here they were, and on a path I felt was wrong. Three bucks with points counting three, four and five, and a doe with her fawn. I knew I was going the right way, whether it was the way I had intended to go or not. I also saw squirrels, chipmunks, beavers (I think?), grasshoppers and butterflies. My companions and messengers that all was well.

I did not reach Paradise Glacier, but I am not the least bit disappointed. I saw all I wanted and more, with the exception of the cairn. But I think that comes later…

I also need to record that I was awakened twice last night. First by the hooting of an owl. I gave thanks, smiled and just listened for a spell. The second time I woke to the howls of coyote! I had just been thinking to myself how silent the night is here, and then my messengers called to me and acknowledged their presence.

I believe I am to take this leap of faith, though I have no idea where I am going nor where I will land nor who I will be when that all happens. I believe I just need to put one foot in front of the other, in perfect faith that I will be guided – not just safely, but masterfully.

There is another dream or vision I need to record. The same night I saw the deer it happened. It felt like I saw it just after I closed my eyes, but you know how sleep is, and it could have been moments or an hour or more later. I saw a bright, glowing globe up in the air, near the top of my field of vision. Below this glowing globe was a tube, vertical extension, about one to two inches wide. Power was flowing down from the globe through the tube with such amazing brilliance I could hardly look at it. I awoke instantly. As I came to, slowly, I got the notion that the globe was “downloading” something through the tube. I told the Universe I am ready for my download. 😉

I am breaking camp now. I feel that I have received what I came for. The cautionary tone in my head is not to forget the lessons I have learned here.

I like who I am out here. I am ME, the true and wonderful ME who keeps her promises and does what she really wants. I have to figure out how to keep being that ME in the real world. Slough off the old and be transformed. Stop selling out who I am in exchange for love and security. I am free to leave here, and I ask God for the courage to take my next step in newness of LIFE.

← Slow and methodical: my second solo camp
I see a dozen mountain ranges, and they call to me →